What To Do in Banff in January

What To Do in Banff in January

What to see and do in Banff in January:

Information and things to do and see in Banff in January

Banff in January is full of welcomed snowfalls and cold temperatures that transform the National Park into a quintessential Canadian winter wonderland. But the National Park isn’t the only thing that sparkles in Banff this time of year—whether it’s the intricate snow sculptures at the SnowDays festival, the natural billowing frozen waterfalls, or the stunning night sky—every aspect of Banff in January is like a picturesque snow globe. As you venture into our winter wonderland, here are a few things to keep in mind:

Things you need to know about Banff in January

In Banff in January, you can expect snow to be everywhere you turn and the average temperatures to be between -5℃ and -10℃. That being said, because of the Chinook winds, there can be unexpected warm days.

The Chinook winds are strong, warm, and dry winds that can shift our temperatures by 20° within a day. This unique phenomenon will give us warmer days within our normally frigid winter season. Another effect of the “Chinooks” can be mild to very strong winds.

What to pack for Banff in January

Although the Chinook winds can provide some warmer days, we are still in the prime of winter, so you will want to be prepared. To properly enjoy all that Banff has to offer in January, you have to have all the snow gear—a winter coat, gloves, hat, scarf, snow pants, snow boots, and plenty of layers to go underneath. For more information about what to pack, you can check out our Banff seasonal packing guide.

In late January, Lake Louise is home to the world-class Ice Magic Festival where ice sculptors from all over the world come to make frozen masterpieces. What’s just as astonishing as the finished pieces is the expertise and attention to detail it takes to make them. On select days, you can visit to see them carve into huge blocks of ice, or simply marvel at the finished sculptures. Also, don’t miss the massive snow sculptures and surrounding celebrations in downtown Banff at the annual SnowDays festival.

2. Experience the frozen falls on a Banff Icewalk

One of the best things to do as the temperatures cool is to visit the waterfalls that turn into glittering pillars of ice. Since public access to Johnston Canyon, one of the best locations for frozen waterfalls, is currently closed, a guided icewalk is the way to go! This popular guided icewalk grants exclusive access and brings you all the way to the upper falls during the day, or by the light of your headlamp to the lower falls at night.

Looking for a truly authentic winter hike? Our other favourite Banff Icewalk is the Grotto Canyon Icewalk, where you’ll walk through the canyon on a frozen creek bed (wearing ice cleats to keep you steady) and discover ancient pictographs and glittering frozen falls. Plus there’s delicious hot chocolate to keep you warm!

3. Stargaze on a mountain summit (late January to mid-March)

The Banff Gondola at Sulphur Mountain is Banff’s most popular attraction, but did you know that in winter you have the special opportunity to stargaze at 7,500 feet? On Friday and Saturday evenings, the Alpenglow Festival gives you the chance to see the rose-coloured glow on the snow-capped peaks as the sun descends and then marvel at the dark skies and luminous stars. This event is included with regular admission and includes live music, s’mores, rooftop firepits, and professional telescopes.

Skiing is one of the biggest reasons that people visit Banff National Park in the winter, and there are several world-class ski resorts just a short drive or shuttle bus from downtown Banff.

Looking to escape the crowds or simply ski somewhere new? Take a day ski trip from Banff on the Kicking Horse Powder Express that includes a full day of skiing at one of the most thrilling ski resorts in North America and a return transport that costs less than the price of a lift ticket. It’s a steal!

5. Zoom through the snow on a snowmobile

Snowmobiling is one of our favourite things to do in Banff in January because there’s no greater thrill than zooming through fresh snow on a powerful 600cc snowmobile! On one of our half or full-day snowmobiling tours, you can follow your friendly guide along scenic trails with panoramic views of the Canadian Rockies in Panorama and Golden, BC – no experience needed!

6. Spend a day at Mt Norquay

Mt Norquay is Banff’s closest ski hill and between tubing, snowshoeing, skiing, and so much more, there is something for everyone. You can spend all of your time on one activity or split up your day. Explore your choice of their 60 runs, fly down Alberta’s largest tube park, or all of the above!

The best Banff activities in January 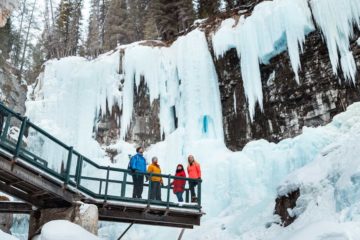 Book a private icewalk tour of the majestic Johnston Canyon Trail for just your group with a knowledgeable, friendly guide.
8:30am
4 Hours 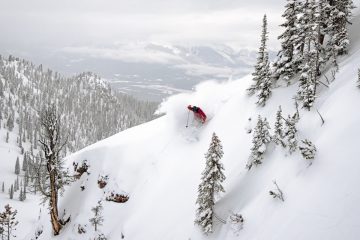 The Powder Express takes you straight from your hotel in Banff to Kicking Horse Mountain Resort, one of the most
6:40am
12 Hours 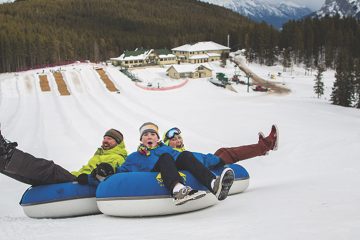 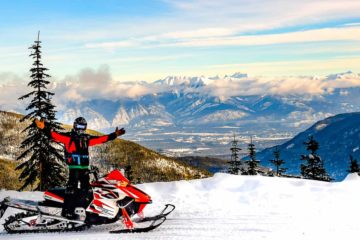 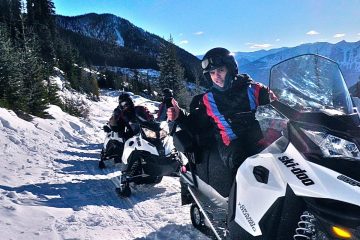 Experience the excitement of driving your snowmobile up to 7,000 feet through the majestic Rocky Mountains in Golden, BC on
10:00am, 1:00pm
2 Hours 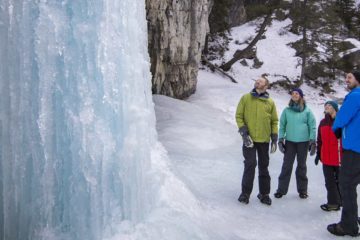 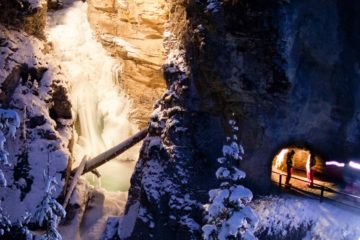 Watch the frozen waterfalls shimmer as you take a Johnston Canyon night walk in quiet darkness beneath the stars. The
6:30pm, 7:30pm
2.5 Hours 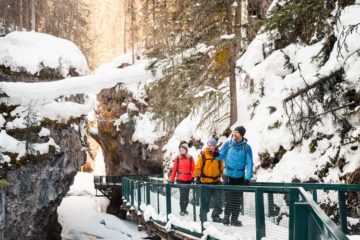 The Johnston Canyon hike in winter is a spectacular show of natural ice sculptures when the thundering falls freeze solid.
8:30am, 1:30pm
4 Hours

Have More Questions About Travelling to Banff in January? We have Answers.

Is January a good time to visit Banff?

Banff is a winter wonderland in January with welcomed snowfalls and cold temperatures. It’s a skier’s paradise with other winter activities including ice sculptures, icewalks, snowmobiling, tubing, and more.

Can you visit Lake Louise in January?

Yes! You can hike, snowshoe, sightsee, and visit the amazing Ice Magic Festival in Banff in January.

Are there ice sculptures at Lake Louise?

Each January Lake Louise is home to the Ice Magic Festival, a world-class ice sculpting competition where visitors can see ice sculptures come to life from huge blocks of ice.

When are there snow sculptures in Banff?

Each January there are snow sculptures throughout downtown Banff during the SnowDays Festival. Watch talented sculptors create works of art from large blocks of snow and enjoy the surrounding celebrations.

Can you snowmobile in Banff?

Snowmobiling is not permitted in national parks, but there is snowmobiling in Golden and Panorama, in British Columbia, approximately two hours from Banff.

Is Banff good for skiing?

Yes! Banff is home to three ski resorts, Mt Norquay, Lake Louise, and Sunshine, and is a great base for other popular ski hills including Panorama and Kicking Horse Mountain Resorts.

What is there to do in Banff if you don’t ski?

Banff is a skier’s paradise, but there’s also plenty of other winter fun including snow tubing, snowshoeing, icewalks to frozen waterfalls, snowmobiling, sleigh rides, the Banff Gondola, and more.

How cold does it get in Banff in January?

What time does it get dark in Banff in January?

Is it worth going to Banff in winter?

Absolutely! Winter is one of the most popular times to visit Banff because of its beauty, skiing, snowshoeing, and so much more!

Can you see the northern lights in Banff in January?

Yes, January is one of the best times to see the northern lights in Banff! They shine brightest from December to February and are best seen on nights with clear skies. Ask our Discover Banff Guides for the best locations to view them. 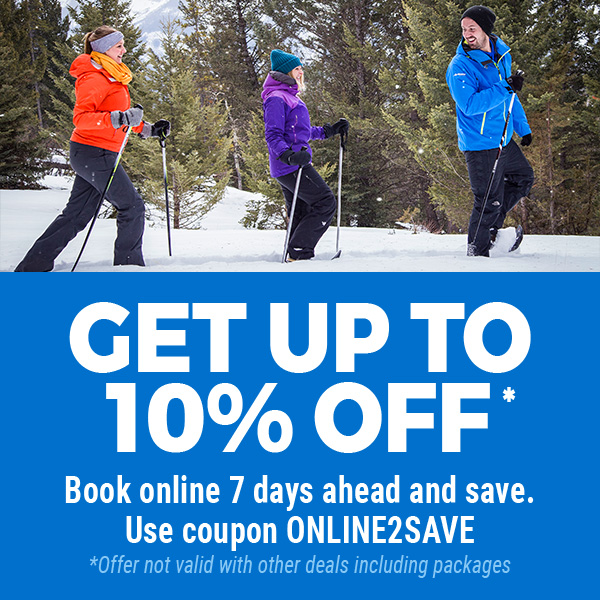 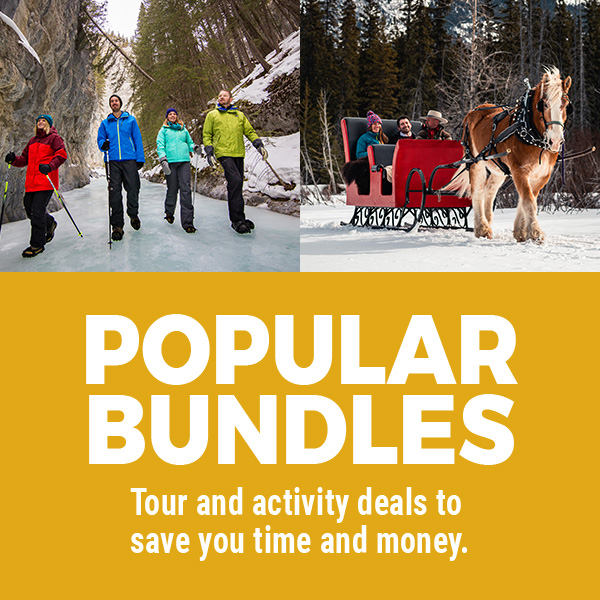 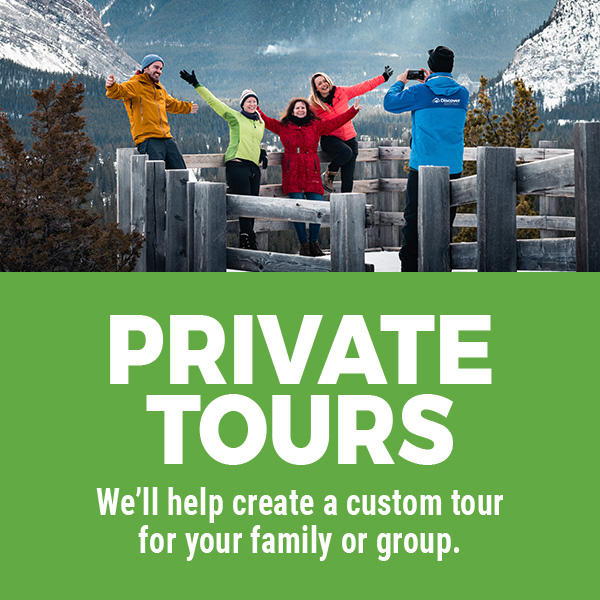